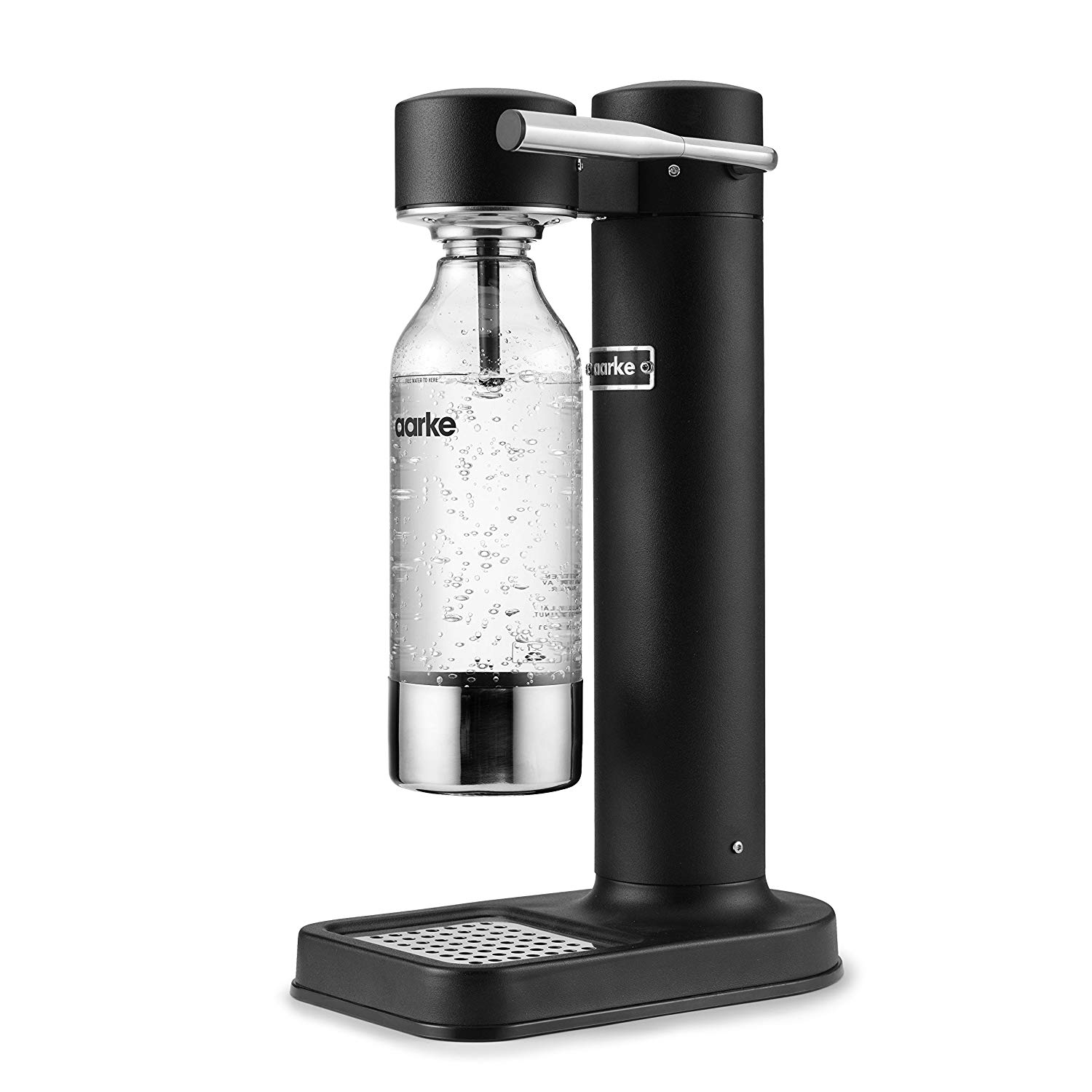 Sodas are known for being filled with fattening corn syrup and acids strong enough to clean a car engine. To avoid all of those bad things, some people have taken to carbonating their own water in the comfort their home. This means you need to get a carbonator so that you can enjoy your soda without all of the junk. Of course, figuring out which soda maker is the best can be a difficult prospect. While we cannot guarantee that the Aarke is the absolute best, we do still think it is one of the best. That is why we have taken the trouble to review the Aarke carbonator for you.

Aarke is a Swedish company started less than a decade ago. While some brands may have stolen the show by getting to market first, Aarke aims to dominate it with quality. It is also worth noting that Aarke is a brand from AGA Marvel specializing in water carbonators.
Aarke is a slight departure from AGA Marvel’s more common large kitchen appliances.
That said, the Aarke is fairly similar to most soda makers, though it does still offer some aesthetic and functional advantages.

Aarke uses 60 oz canisters which is pretty much the industry standard and averages out to about 120 carbonated bottles before you need to refill it. That said, this is not exactly an inexpensive soda maker, and it does not even come with the first CO2 canister.
However, this creates even further issues with the Aarke in that they do not actually sell CO2 canisters. Instead, you must purchase a CO2 canister from a third-party company with the intention that it comes from SodaStream. This is a bit odd since Aarke is ostensibly in direct competition with SodaStream and would not want to send customers their way.

This is definitely one of the areas where the Aarke shines–even more so than many of its more established peers. The Aarke is made primarily out of stainless steel which ensures that not only is it durable, but it is also naturally rust and corrosion resistant. This arrangement also provides the Aarke with legitimately elegant aesthetics that speak to a sleek, minimalist design.
The carafe or bottle is 14 ½ oz and made out of PET plastic which just a different way of making polyester. This actually provides a number of benefits, but the biggest is the impact resistance making it impervious to most falls. On top of that, the carafe will not react with pretty much anything you put in it except certain alkalis you probably do not use day to day.
It is also worth noting that Aarke does come in a lacquered model as well. This is still pretty much the basic Aarke except the stainless steel body has been painted. This does offer a bit more protection from rust and corrosion but not enough to sway your decision is your prefer the bare metal.

This is easily one of Aarke’s best and worst qualities as the actual function itself is fairly simple. Oddly, many people have noted having difficulty figuring it out. Still, you load the CO2 canister, connect the nozzle to the bottle, and then pull down on the lever. There really is not any more to it than that. Now whether or not you feel that pulling the lever gives the result you were hoping for or not is a different matter.
Of course, one area of use that is about as simple as you can get is the assembly. Quite frankly, there is no real assembly to the Aarke. The closest thing to assembly that this soda maker requires is loading the CO2 canister and connecting the bottle to the nozzle. As far as the actual soda maker goes, the splash tray is removable and required to clean the tray. However, no other parts really need to be removed.
It should be noted that while the Aarke may have achieved a pinnacle of simplicity, that does mean it lacks some of the functions other soda makers have. For instance, you cannot program the Aarke like some of its competitors, nor does the Aarke have a display of any kind. This generally does not cause issues, but it could otherwise help with gauging the carbonation.

As we can see, the Aarke takes a lot of the benefits that many of the top brands provide and offers a sleeker form to give it that classy, minimalist look. While it uses the CO2 carbonation method, you may have to use twice as much CO2 to get the same effect. That said, setting up, using, maintaining, the Aarke is extremely easy with little detachable parts of places to clean. With the ability to use third-party accessories, the Aarke is great wherever you are.

When Aarke first came out I bought it because I found the stainless steel design so striking. They also offer it in a black finish that’s just as handsome. I was delighted with its performance, at least until the seal at the CO2 cartridge started leaking after the first year. I looked unsuccessfully for a replacement washer, and Aarke was good enough to send a repair kit – which I unfortunately messed up. After requesting another, they actually offered to replace the whole unit with a new model.
They even addressed the old seal problem with a different design that made it more accessible, and included a spare washer.
The new Aarke performs up to expectations. I use a 60L CO2 cartridge and can carbonate my 1-liter drinks with a single push of the lever.

I’ve been using SodaStream carbonators for years. I don’t add flavors; plain sparkling water is fine. But my last SodaStream made a honking noise under pressure. And not a small noise. Something loud that made people stop and stare – or laugh.
The Aarke I bought as a replacement doesn’t have that problem. It makes a small hissing noise as it releases the gas, and that’s it, never worse than a little grumble if I pump the lever. I’m pleased with it and it works very well.

It costs more than some similar products, but the AARKE is probably worth it. Everything about it seems well-designed and it functions smoothly. As sharp as it looks in the pictures, it looks better right before your eyes. My only complaint is that even the monster 60L CO2 size doesn’t last long enough, but I do like my soda extra fizzy.

Aarke makes an impressive product with its sleek look and ultra-quiet operation. I live in a small apartment right now so I like that I can whip up some sparkling water whenever I want without a lot noise and fuss.

After using it for a few weeks I did have a problem with the carbonation, which turned out to be because water was drawn back into the carbonation tube. My solution was to hit the lever once more after I remove each bottle, blowing out any trapped liquid. This seems unnecessary and could be a design problem, but I really like my Aarke. I do wish the plastic bottle was a little sturdier, even though it does carry a label as a reminder to replace it periodically. But I think that’s more of a health/safety precaution than anything else. Now I’m thinking about buying a second one!

I love my water carbonator! So far, I’m expecting the savings over purchasing the commercial stuff to more than pay for the unit in a few months. This should hold true even though I’m drinking more water than ever. It’s just fun to use. Tastes way better than the filtered water coming out of the fridge.

It seems like a solid, well-made little machine. It looks great on my dining room table at meals. I do advise checking for a place around your neighborhood that will let you exchange or refill the CO2 cylinders.

I liked the first one I bought, so I wound up getting a second because I drink sparkling water every day at home and at work. I used to stock up on Pellegrino every time I went shopping. Having a soda maker is definitely the better way to go. You can control the level of carbonation to get just the fizziness you want.

My only complaint is that I went for the 60L CO2 canister size, but don’t actually get 60 bottles of water out of it, so it is costing me more than I hoped. And the machine itself is higher in price than some comparable products.

So is it worth it? Yes! It’s worth it just for your health if you’ve been drinking sugary sodas. But it would be nice if the big cartridges were cheaper.

This machine looks great and it makes a great addition to your kitchen. If you like good looking kitchen appliances, this is it. I bought this one because it’s nicer than SodaStream machines, otherwise it’s essentially the same as SodaStream. The carbonated water tastes great. It has been reliable so far, almost 6 months.

Very nice soda maker, works great and looks great. My only complaint is they should provide glass bottles. The SodaStream Crystal glass bottles don’t fit. The overall experience would be much better with glass bottles. Nevertheless, it’s a great product. 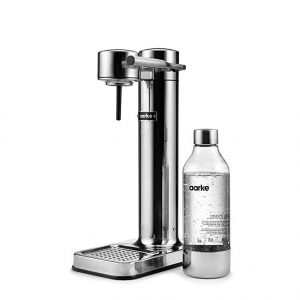